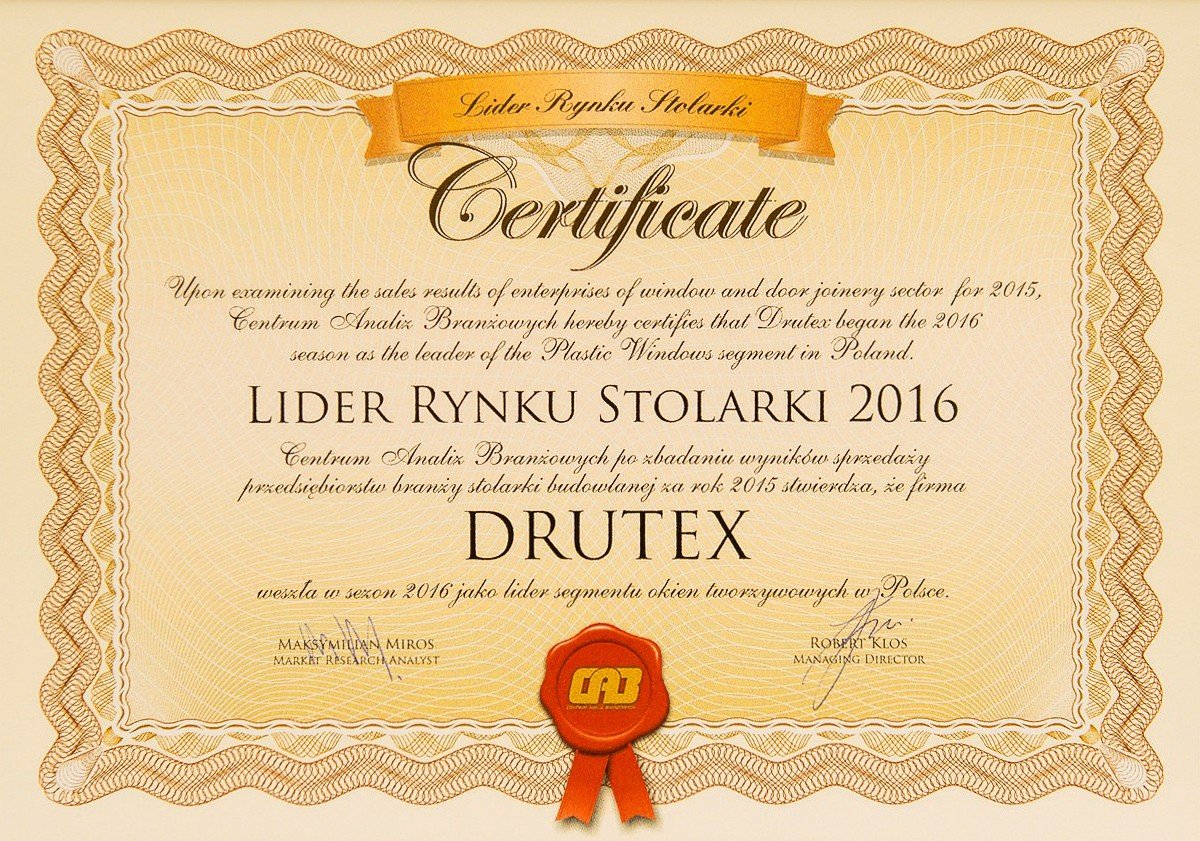 DRUTEX THE LEADER OF THE WOODWORK MARKET IN POLAND!

DRUTEX for the fifth consecutive time won the ranking that awards leaders of the window and door woodwork market in Poland. The company has been recognized as number one among Polish producers of plastic windows. The plebiscite has been organized for years by the Industry Analysis Centre (IAC).

The title of the market leader goes to companies that had the best sales results in their sector in the preceding calendar year. In this year edition of the contest, more than 100 companies were nominated for the award. Having examined the sales figures, the IAC agency awarded DRUTEX S.A. with the title of the Leader of Woodwork Market 2016 in plastic windows segment.

DRUTEX closed the year 2015 with  sales revenues that amounted to 620 million zl, which is a 19% increase in sales comparing to  the same period of the previous year. Further increase in market share, both in Poland and abroad, results from investment in production capacity, technological advancement and comprehensive product range. Just in the last three years DRUTEX has allocated more than 200 million PLN to investment that helps the company to optimize production processes and respond to the growing demand. The investment into the European Woodwork Center has given the company extra 55 thousand m2 of production area, which enables to operate even more efficiently and to respond more quickly to market requirements.

„DRUTEX is a healthy company that was built on strong foundation. For years we have been consistently implementing a strategy based on investment in the company, in technological  facilities, production autonomy and cutting-edge product solutions. These activities have contributed to the current market success of the company in Poland and abroad. For the fifth consecutive time we have been recognized as the market leader in Poland, and that means a lot. We keep increasing our capacity, we are going from strength to strength and we are not slowing down. There are a lot of challenges ahead, both on the domestic market and abroad. However, I am convinced that the coming months and years will prove our professionalism and reliability in manufacturing high-quality window and door woodwork. Modernity and  superior quality have enabled us to win Clients’ trust worldwide for years” – says Leszek Gierszewski, the president of DRUTEX S.A.

The award ceremony for the Leader of Woodwork Market 2016 took place on 19 September in Warsaw.

❮  previous
DRUTEX PRESENTS ITS OFFER AT THE SAIE EXHIBITION IN BOLOGNA!
next  ❯
DRUTEX at the Paris trade fair Equip’baie